Plant a tree in memory of Roland
An environmentally-friendly option 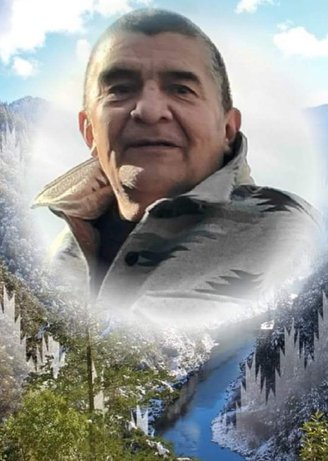 Roland “Branagin” Duane Davis passed away unexpectedly due to a blood clot and heart complications on February 28, 2021 at Mercy Hospital in Redding, with his daughters by his side.

Dad was a proud member of the Hoopa Valley Tribe and enjoyed fishing, eeling, mushrooming and hunting; as well as gold panning, collecting rocks, gambling, and wooing the ladies. Like his mother, dad had a “green thumb” and loved to garden and spent most of his time outdoors enjoying life to its fullest.

Dad was a very charismatic person who loved reminiscing about the good ol’ days and could start a conversation with just about anyone. One of his best traits was his humor which, besides his looks, was the most dominant genetic trait that he passed to all of us. His children and grandchildren were the pride and joy of his life, and dad would use any excuse possible to talk about us and our kids to whomever would listen.

Roland spent the last few years of his life going on many adventures with his loving girlfriend, Cherie French-Bowie, who was always by his side. Cherie’s family took him in as there own and loved him beyond measure even referring to him as their dad and grandpa. Dad will be forever missed but never forgotten by all those who loved him and enjoyed his company.

A wake will take place at Roland’s home in Hoopa on March 5, 2021 starting at 5 p.m. Gravesite burial services will be at the Davis Cemetary in Hoopa on March 6, 2021 at 11 a.m. All Covid safety precations will be in place — mask up, wash hands and social distance as much as possible.

Plant a tree in memory of Roland by clicking here.
To send flowers to Roland's family, please visit our floral store.

Plant a tree in memory of Roland
An environmentally-friendly option

Plant a tree in memory of Roland

1 tree planted in memory of Roland

A Memorial Tree was planted for Roland "Branagin" Duane Davis

Plant a tree in memory of Roland