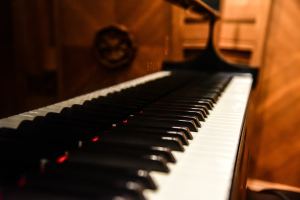 Our mother, Tonette Louise Johnson (Toni) was born in Sirdal, Norway, April 25, 1928, and passed away in Eureka, California on February 4, 2019. Her parents immigrated to America when she was two years old and settled in Washington State.
Toni Kveven married Paul Johnson in 1949, and they moved from Washington to California. They lived in Garberville before settling in Orick in the early 50's. In addition to raising their six children, Mom was very active in the community. She was a member of the Orick Presbyterian Church; Orick Boat Club; PTA; Orick Sewing Club; United Presbyterian Women; Redwood Creekers; and the Orick Chamber of Commerce. For decades, you could find her running the local fireworks stand, and selling tickets to the barbeque at the annual Orick Rodeo. She was also the bookkeeper for Pickett & Johnson Logging Company.
Mom was a gifted, self-taught pianist/organist and was hired to play at many functions. She was the organist at the Presbyterian Church for over fifty years. She was also great at crocheting; knitting; cooking; and baking biscuits & blackberry pies, and would often donate homemade items to be auctioned at charitable events. Mom was well known for being kind, thoughtful, and very generous.
In her younger years, Mom was very athletic and enjoyed swimming, playing softball, roller skating, snow skiing on Mt. Baker, water skiing on Shasta Lake, and bowling on leagues at E&O Bowl in Blue Lake, where she won many trophies. She was a San Francisco Giants fan since their inception and she and Dad attended many games at Candlestick Park. Mom also enjoyed watching the Giants on television and would always keep score. (Her family members knew not to call when a game was on.) She loved to play Pinochle and Spades, and had a lot of fun playing the slots in Trinidad.
Mom liked listening to gospel music. She often watched the Gaither Gospel Trio on television and would listen to their CD's. Twenty years ago, she and Dad attended one of their concerts in Oakland, which they thoroughly enjoyed. She also enjoyed shaking Bobby Kennedy's hand at the Arcata Airport, and meeting Tom Selleck on Waikiki Beach while he was there filming Magnum, P.I. She was a loving wife, mother, grandmother, great grandmother and friend, and will be truly missed.
Mom is survived by her children, Greg (Klamath), Karen (Mark Clark, Medford, OR), Kathy (Bill Mitchell, Clayton), and Brad (Cheryl, McKinleyville). Also survived by eight grandchildren, Garette (Ginger), April (Matthew), Samantha, Scott, Kyle, Kenton, Kaila, and Zachary; and four great grandchildren, Maryn, Svea, Van, and Victor. Also survived by her sister, Gladys Jacobsen of Seattle, WA, and numerous nieces and nephews.
Mom was preceded in death by her parents, Ole and Gurina Kveven; sisters Karen Netherton and Irene Loland; brother Telmer Kveven; Paul, husband of sixty years; daughters Kim (Jeff Beck, Medford, OR), and Paulette (PeeWee Gilliam, Eureka); and grandsons Matthew and Sandy.
There will be a Celebration of Life on Saturday, March 9, 2019, beginning at 1:00 pm, at the Orick Community Hall, Orick, CA. Mom requested cremation, with her ashes to be scattered at Freshwater Lagoon where Dad's were scattered 10 years ago.
A special "Thank You" to Judy Hagood of Orick, and to the staff at Eureka Rehabilitation and Wellness Center.